← more from
touchtheplants
Get fresh music recommendations delivered to your inbox every Friday.
We've updated our Terms of Use. You can review the changes here. 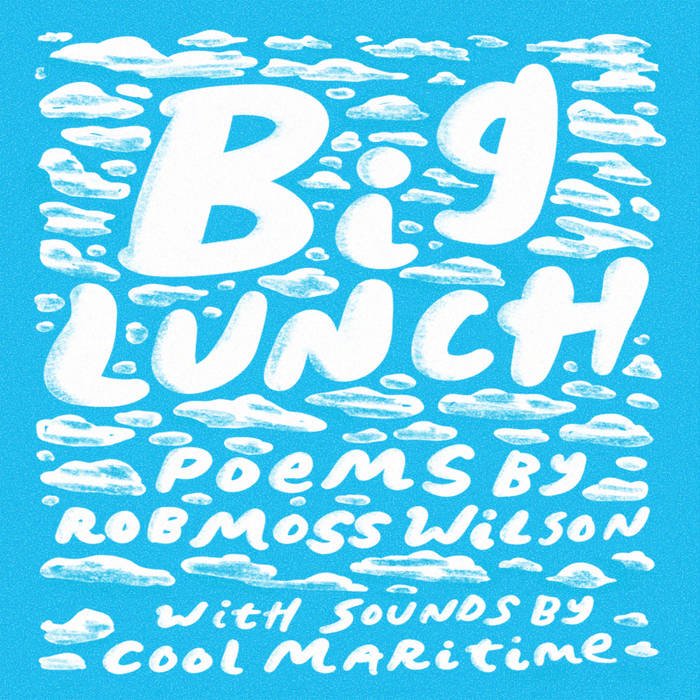 
Synthesist and filmmaker Sean Hellfritsch and author-illustrator Rob Moss Wilson met in 2008 while constructing a treefort together in Santa Cruz, California. Rob was invited to intern on a property where Sean was busying his hands with permaculture and animal husbandry, but after just a brief time working together the two realized each other’s ability to cultivate forts of a more abstract nature. From that point forward, the structures they built would be made of sound, language, light, and spirit culminating in Big Lunch, a union of spoken-word poetry, ambient composition, and pen-and-ink drawings that weds Hellfritsch’s bubbly, revitalizing synth work to Wilson’s emotionally honest, casually profound poems and drawings. When taken as a purely auditory journey, Big Lunch is a succession of koan- like musings delivered in Wilson’s unpretentious tone, which is both deepened and given levity by Hellfritsch’s sonic watercoloring. Wilson’s words meet us right where we are: the dirt-spatter on our cars, the push-pull of grocery store impulses, standout joggers clad in bluejeans, and any number of modern niceties that become hilarious and humbling when simply noticed. In fact, noticing these details might be Wilson’s superpower.

Recognizing this knack throughout years of friendship, Hellfritsch and partner Kaitlyn Aurelia Smith put themselves up to the task of capturing the literary side of Big Lunch -- which was first printed as a standalone book of writings and drawings a few years back-- in audio form, and in Rob’s own voice no less. “I had to read the poems out loud, which I found slightly nerve-racking. I enjoy performing, but I rely on an audience to give me the energy to make it more animated,” says Wilson of the recording experience. “Instead what we were able to capture is something more subtle and straight-forward, and with Sean and Kaitlyn's excellent direction we were able to set the table for Sean to do his blissful thing amongst my words.”

Indeed, Hellfritsch’s glistening tonal palette makes comfortable bedding for Wilson’s locutions without a shred of needless melodrama, always supporting, never interjecting. This intimately balanced dynamic places the listener not in Rob’s mind as expected, but in Sean’s whose music becomes a transcription of his own feelings as he sits downwind of the dialogue. His musical weather-machine sets us striding beside Wilson, who becomes our trail guide across varied terrain. In this sense, Big Lunch feels like a hike in the company of a wise and humorous friend who has special access to his own heart and mind, the contents of which he is able to spin into everyday proverbs as we wind up the path by his side.

Big Lunch plays as one continuous piece that is landmarked by the discreet announcement of each poem’s title, if it happens to have one. Environmental field recordings like ocean waves, rainfall, and birdsong decorate modular synth patches that meander between crystalline swells curling at their edges, flits of helium-filled melody that seem to climb into infinity, and burbling, marimba-like pats of harmonic percussion that all indicate Cool Maritime’s singular handiwork.

The album embarks with a glassy pad that lays low and remains calm for some time, leaving the mood-setting to our host who dives right into the beauty-in-the-banal ethos of Big Lunch with a poem entitled “Cleaning the Hair From the Shower Drain”. “Do not ask / from who / or from where,” Wilson muses, “Alone and in silence / it becomes / a simple task”. A little ways further, Hellfritsch’s timbre launches into a more idiophonic mode using woody plucks to punctuate the air. As the music assumes an earthier tone so does the subject matter spoken over top of it. “Prominent Geological Features and the Names We Give Them” offers a jocular reflection on the conceptual sphere we enter by applying titles to geological features: “Two different things / come together / to make a third thing.”

There is a healthy amount of space dedicated solely to the musical aspect of Big Lunch at its midpoint, which is necessary granted that Wilson’s poetry, an artform he refers to as “efficient thought technology”, requires room to let its breadth blossom from its brevity like a Magic Grow capsule that can only take the shape of stegosaurus when given patience (and a mason jar full of water, of course). In this vein, the final act of Big Lunch is entirely instrumental, exhibiting the Cool Maritime aesthetic in rare rhythmic form complete with a dancey, anchored beat that acts as a sort of Ewok celebration after the arboreal odyssey Wilson has led us on. Hearkening back to their days of treefort construction, Big Lunch is truly a space that can be inhabited and walked through, and this final moment acts as the campsite cookout waiting to greet us at the foot of the mountain.

That Hellfritsch and Wilson once worked together in a permaculture setting is not irrelevant to Big Lunch. The album operates much in the same way, with each part feeding the others without a drop of resource wasted. It is Taoist wu-wei, audio objet trouvé, perfect in its buoyant revelry of the imperfection within modern minutiae, providing a lighter alternate route where so much contemporary spirituality begs us to wallow in gravity and forced profundity. As Wilson says, “When aliens comb through the strata of modern human detritus and uncover this audiotape that Sean and I made I hope it transports their perceptual faculties to what it was like to be alive and human in 2020. They will learn one kind of story by reading the newspapers, and they will learn another from us, about our encounters with our feelings, about specific objects like our unfolded laundry and the bruised bananas at the complimentary buffet or the big lunch we just ate that pacified the interrogative capacity of our brains and how they can resonate upward and outward to depict the texture of our shared being, and hey, let me tell ya, I find it so pretty sometimes I just gotta share.”